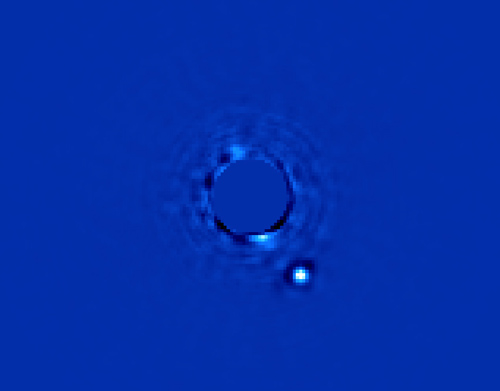 Now this is exciting. The image you see above (courtesy of the Gemini Observatory) is a direct image of an exoplanet and the star (Beta Pictoris) it is orbiting. The star is blocked out by an opaque disc to prevent glare so the exoplanet can be seen better. At 63 light years away, the planet – Beta Pictoris b – only takes up a few pixels to the lower right of the star in this image, but it is actually 60% larger than Jupiter, the largest planet in our solar system.

As many of you probably already know, an exoplanet is a planet that is outside our solar system, orbiting a different star (or stars). As of this writing, there were 756 confirmed exoplanets and 3,469 unconfirmed candidate planets from Kepler data. That’s a lot of planets, and we are only beginning to barely enter the vastness of space to find them. As astronomy, detection techniques, and technology advance, we are sure to find more.

Because exoplanets are so far away and their light pales in comparison to the light of the star(s) they orbit, exoplanets are difficult to see directly. Imagine if you are standing twenty meters away from a 2,000 lumen light source that has a 10 lumen light source a few centimeters away from it and you can get the idea. It would likely be impossible for you to see the 10 lumen light, but it wouldn’t mean that it doesn’t exist.

To get around this, astronomers use a number of techniques to find exoplanets hiding in the glare of their stars. Among them, the doppler spectroscopy (colloquially known as the “wobble method”), transit, pulsar timing, and astrometry methods are perhaps the most used. Most methods of exoplanet detection are indirect. That is, the exoplanets are detected without imaging of the exoplanet itself.

About a decade ago a talented team of scientists starting working at the Gemini Observatory in Hawaii and Chile and developed the Gemini Planet Imager (GPI). This new instrument was recently connected to the Gemini South Telescope, which is situated near the summit of Cerro Pachon in central Chile at an altitude of 2,722 meters. 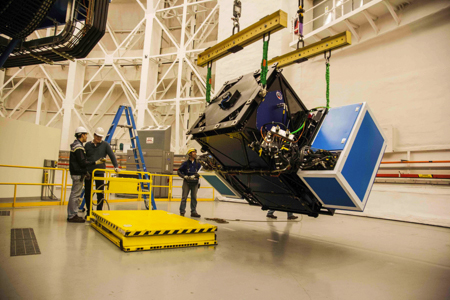 The image above of Beta Pictoris b represents one of GPI’s first images and is truly an historic and exciting find. While exoplanets are indeed far away physically, the lack of direct imaging can make it even harder for many of us to relate to. We can all pick up a pair of binoculars and see the rings of Saturn or the red dust of Mars. No matter how much data there is to prove an exoplanet is there, without direct imaging an exoplanet can feel even further out of reach.

With GPI, we are entering a new era where this is no longer the case. We can now actually see exoplanets, just as we can see the planets in our solar system (though not as clearly, of course). This will tell us a lot more about planet formation and our universe than ever before.

“Most planets that we know about to date are only known because of indirect methods that tell us a planet is there, a bit about its orbit and mass, but not much else,” says Macintosh. “With GPI we directly image planets around stars – it’s a bit like being able to dissect the system and really dive into the planet’s atmospheric makeup and characteristics.”

Personally I’m really looking forward to all the new data that GPI will bring. The more we learn about exoplanets by imaging them directly, the more we can learn about ourselves and our place in the universe. It is truly an amazing time to alive, which I am thankful for every day. Go science!

Previous: No Resolutions
Next: It’s Not That Funny