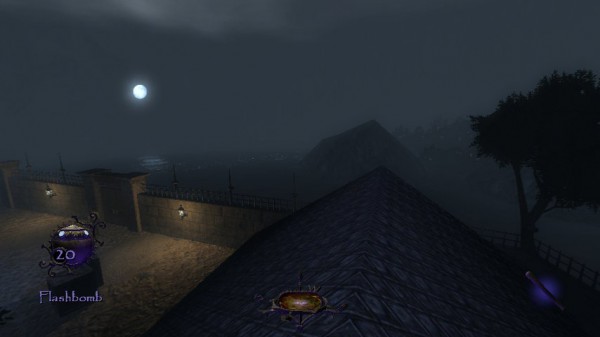 Okay, time for a little bit of a different post. Just as I love road running, trail running, cycling, rock climbing, and outdoor activities in general, I also have a few indoor hobbies, one of which is gaming. I am by no means what one would define as a “hardcore gamer” anymore. No longer do I build gaming PCs, purchase new gaming consoles right away, or spend large swaths of my time and money on gaming. That being said, I still love gaming and try to get in some time for it when I can, and I have a healthy Steam collection thanks to all of their sales throughout the years.

If you are a bit of an older gamer like me, you might recall a wonderful gem of a game called Thief: The Dark Project. Released in late 1998 (hard to believe that was almost 14 years ago), it was a game that helped define the stealth genre. I was in university then and have fond memories of going through the game that winter break. One thing that I particularly loved in that game was the ambient sound, which really set the mood perfectly and made situations more tense (and an annoyance to my upstair neighbors – sorry about that my friends!).

A first-person perspective 3D game, so many other things made Thief challenging, rewarding, and one of the best games of the time, and still one of my favorites. Being a thief, your character was smart and elusive but not strong. Getting into head on fights usually means you’ll lose, and the game promotes stealth and evasion over combat. The artificial intelligence was also great for its time. If you knock a guard out and leave them unconscious in the open, other guards will find them and then start searching for you.

The success of the game brought about three sequels: Thief II: The Metal Age (2000), Thief: Deadly Shadows (2004), and a reboot of the series, Thief (2014). I had a lot of fun with Thief II, but by the time Thief: Deadly Shadows (T3) came out, I wasn’t gaming as much due to moving to another country and other life changes. By the time I was able to try it out, I was using a notebook computer with a woefully underpowered GPU that struggled to make the game anything more than a slide show. Resigned to not being able to go through it, I set it aside.

Fast forward 10 years, where one day I came across one of the wonderful sales on Steam and saw T3 on sale for $3.75. Less than the cost of a coffee from my local barista, I picked it up and a decade after the game was released I was finally able to complete it. The gameplay has held up well over time, but the graphics are dated and lack of native widescreen support means you are either stuck playing it with black bars on the side or everything is stretched to fit your monitor, making things look rather blurry.

After a bit of investigation I found out about two things that make the game even better: the Sneaky Upgrade and the Collective Texture Pack. The Sneaky Upgrade includes a lot of tweaks for the game and adds native widescreen support, while the collective texture pack includes high definition textures for the entire game. With these two installed, T3 looks a lot more modern and, for me, made it more fun to play. As for the game itself, I definitely recommend it for any fan of the stealth genre or Thief series.

Since the developer (known as John P.) of the Collective Texture Pack closed down his website some time ago, I’ve decided to share both this pack and the Sneaky Upgrade here for those who are interested. You can download them both below, and I’ll keep them here as long as my bandwidth allows.