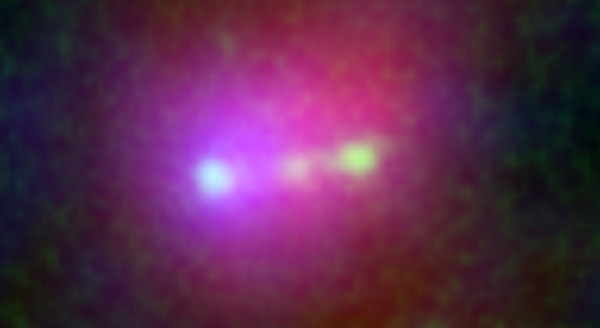 This is pretty amazing, astronomers using the Atacama Large Millimeter/submillimeter Array (ALMA) telescope in Chile and NASA’s Hubble and Spitzer space telescopes have discovered three galaxies merging at the dawn of the Universe. Being that the merge took place nearly 13 billion years ago, it makes me wonder what happened to them, and what they look like now. What amazing wonders have ensued in these galaxies since their light reached us? We’ll never know, but it is something that always makes me in awe of our Universe.

Quoting Richard Ellis of the California Institute of Technology, a member of the research team:

Check out the source link for more details: http://www.jpl.nasa.gov/news/news.php?release=2013-338

Previous: Still Going
Next: A Decade Ago