There has been some talk about the 2014 Mac mini being underpowered and expensive. Looking at the base level, it is definitely lacking in that it only has a slow mechanical hard drive. If Apple put in an SSD – even a 128GB SSD – it would be a much better deal. The other main criticism I’ve seen has been due to the now non-user upgradeable RAM. I’m not sure why Apple did this and it is a letdown for those people who like to upgrade their RAM after. That said, even upgrading later you are basically paying the same price, and the mini maxes out at 16GB. It’s all just about buying it now or later. I prefer to buy my computers with the specs I want at purchase time, so for me it’s not a big deal, and I don’t think it is for a lot of others as well.

Looking at the other mini models the specs are much more respectable. The high end, non customized model has a 2.8GHz i5, 8GB of RAM, and a 1TB fusion drive for about US$1,000. Intel’s NUCs are viable competitors, but they have external power bricks, less storage, and don’t look as nice (at least in my opinion).

I’m getting off track. This actually isn’t a full review of the 2014 mini, which I hope to get to later. This is about basic observations of the 2014 mini and solving a problem I had with it. Since December 2012 I’ve been using a 2012 MacBook Pro Retina (MBPr) 15 inch, and it has been awesome. It completely replaced my desktop and coming from using a 2010 11 inch MacBook Air as my one and only computer, the screen size and power were amazing. When I got it I was using it for work daily, carrying it with me everywhere. I needed a computer to take notes and do work on in and out of the office, and it was perfect for that. At home, it was more than powerful enough to handle any of the tasks I did, which were light Final Cut Pro, Logic Pro, and gaming use.

This machine is still going strong. But my needs have changed a bit since I bought it. I no longer need to travel much for work, and I started to think about using a Mac mini at work instead. In 2011 I bought a used 2009 Mac mini for my entertainment setup, and it worked perfectly for five years streaming media and as a file backup server, being on 24/7. This made me start to think about using a mini at work instead of my MBPr, and in 2013 I found a great deal on a refurbished 2012 Mac mini that I bought and put in my office. I didn’t have to carry my MBPr with me every day and the mini was more than enough for my needs at work.

My 2009 mini at home was getting a little long in the tooth, and I missed things like AirPlay. I also had acquired a cheap Apple Thunderbolt Display (TBD), and was using my MBPr mostly as a desktop replacement. Impressed with the 2012 mini, I thought about getting a new one for home. Despite the negative press, late last year I replaced my 2009 mini with the top specced 2014 Mac mini.

After using it for a while hooked up to my TV, I was really impressed with its performance for everything I needed except gaming. The Fusion Drive was really surprising and I never felt like I was using a mechanical hard drive. I started to think, why not hook it up to my TBD and try to use it as my main computer at home? I did that two weeks ago and haven’t noticed a difference between it and my MBPr – again except for gaming. While it might be a little overpriced, the 2014 mini, especially the mid and top end models, are very capable machines.

So now I find myself using my 2014 mini as my main computer at home, hooked up to my TV and my TBD with a 3 meter thunderbolt cable (I have a small yet unfortunately expensive studio apartment in a large city, and this gives you an idea of how small). When I want to have some gaming sessions, which these days isn’t too often, I hook up my MBPr or use my PS4.

But this is where I ran into a little problem. In my small studio apartment, I have a lot of various devices. There are many USB3 hard drives I use for storage and backup, two wireless keyboards, two Magic TrackPads, one wireless mouse, various remote controls, and my router which sends out 2.5 and 5GHz signals. I use the Apple Wireless Keyboard and Magic TrackPad at home, which I’ve fallen in love with. If you use a Mac, the Magic TrackPad is really wonderful. Both the Apple wireless keyboard and Magic TrackPad are connected via Bluetooth. I had no problems at all with the keyboard, but the Magic TrackPad was giving me issues. The cursor lagged to the point it was unusable. I tried all the usual fixes, but nothing worked.

I read about potential USB3 interference with Macs and bluetooth, so I moved around my USB3 drives but no luck. If I put the Magic TrackPad right next to the mini, which is located in my entertainment center, it worked without a problem. Put a little distance between the two and the lag continued. While I had a USB receiver mouse, I wanted to use the Magic TrackPad. There was just too much interference, and the only way it would work is if I moved the mini to my desk underneath my TBD.

USB bluetooth adapters can be found in just about any large electronics store, and I decided that I’d buy one of those, plug it into the TBD, and then use that instead of the mini’s internal bluetooth. With it being right next to the Magic TrackPad, this should solve the interference problem. I made my way to the brick and mortar electronics store to find a number of adapters, but none that stated Mac compatibility. What the hell, I thought, they are cheap so I’ll buy one and see if it works.

I bought a Logitech adapter (the stylishly named LBT-UAN04C2BK) that specifically stated it would only work with Windows. I first plugged it into my MBPr to test it out, and nothing happened. There are no Mac drivers or software for this adapter, so no way that I knew of to see if I was using this adapter or the internal bluetooth. After a bit of sleuthing I found out about the Hardware Tools for XCode, which you can easily download from Apple by making a free developer account. Within the Hardware Tools is an application called Bluetooth Explorer. 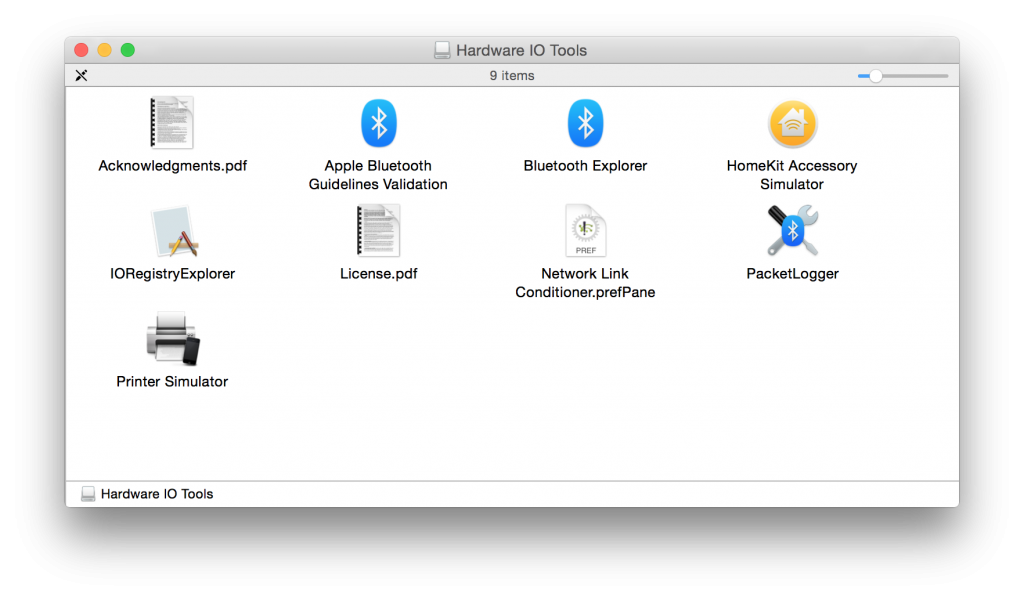 With this magical little program you can see your bluetooth devices and select which one you want to use. After you open Bluetooth Explorer nothing will happen, but you’ll see the icon in your dock. Click on it, and then from the task bar go Tools -> HCI Controller Selector. Here you will find a menu where you can select your host controller.

On my MBPr, I found surprisingly that the USB adapter I had just plugged in was showing up and was listed as the active controller (with [ACTIVE] after the controller name). On my Mac mini, the Apple one was the default and I had to switch it to the Logitech adapter. To do so, simply select your new adapter from the dropdown list and click on the Activate button. And there you go, you now are using your new adapter.

All of your bluetooth devices will have to be repaired because they are now using a new adapter. This isn’t a problem, and it only takes a minute or so. After re-pairing my keyboard and Magic TrackPad, I found that the Magic TrackPad was working perfectly. Nice and smooth with no lag at all! It only cost me US$15 to solve a lot of frustration. Sure, it would have been great to not have it there in the first place, but until I move to a bigger place where I can spread out my devices and have less interference, I didn’t have an option.

That’s how you easily use a USB bluetooth adapter on your Mac. The Logitech adapter I bought works fine, and I would bet that any other adapter would also work, even if it says it is only compatible with Windows (as the one I bought did). If you’re having bluetooth problems with your Mac, this is a quick, cheap, and easy fix.

Previous: Making Use of Safari
Next: Jon Stewart is Leaving the Daily Show